“No man shall die on my watch. Failure is not an option.” 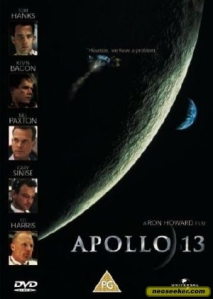 Are you a movie watcher? I hope to be a movie watcher someday. But sadly, my track record is not very good. I can count on one hand the movies I have watched in the last decade. It isn’t that I don’t like movies or the idea of relaxing in front of a comedy or something more intriguing and thought provoking, but I think my problem lies in fact that I cannot hold still.

The first assignment for my master’s program was to watch Apollo 13. (Yes, I know. You have seen it. I should have had you write the paper!) I downloaded it from Amazon on my iPad which was convenient for someone who can’t sit still. I watched it while making breakfast, doing dishes, and folding laundry on a Saturday morning. With all that multi-tasking, you may not think I got anything out of the movie, but I did.

Since the movie was made in 1995, let me give you a brief recap. The Apollo 13 space shuttle under the command of James Lovell (played by Tom Hanks) took off without a hitch. An explosion occurred when the crew stirred the oxygen tanks and the forever famous call was made to NASA by the commander: “Houston, we have a problem.”

Receiving the call was Gene Kranz (Played by Ed Harris) who replied: “We’ve never lost an American in space, we’re sure…not gonna lose one on my watch! Failure is not an option.”

In my leadership class, I wrote about how Gene Kranz kept the vision of saving the men in front of his team at all times. Failure was not an option. And in the end, by utilizing every strength, ability, and skill of each team member, they succeeded in bringing the men safely home.

Even after my paper was finished this phase kept running through my head, “No man shall die on my watch. Failure is not an option.” And then I realized why I thought it was profound. This is the same mission we have as the church. But I wonder if we are as passionate as Gene Kranz about saving people’s lives? Are we passionate about saving people who are endangered to live without Christ and endangered to live without God in eternity? Or have our churches become programmed institutions instead of the hope that Jesus chose them to be to the world? Have they become so ingrained in church culture and the needs of the congregation that they are willing to forsake the future to preserve the past?

I may be an eternal optimist but I believe that God is still acting in human history. He chose to build a community of believers that would take stewardship of humanity and bring hope to the world. I don’t believe that God has changed His mind.

Every day, Christians are breaking walls and barriers that keep people divided. They are working together, honoring each other’s gifts and strengths in the body of Christ to move this world forward towards glory. I see church as a broader community refocusing its vision on the one thing that really counts: “No man shall die on my watch. Failure is not an option.” I see the church as the hope that Jesus empowered it to be.

← Do you know Leah?
So you are already tired of the Seattle weather and it’s only November 1st! →

1 Comments on ““No man shall die on my watch. Failure is not an option.””